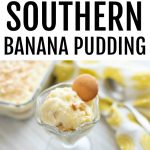 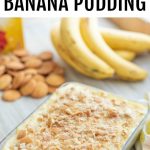 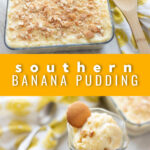 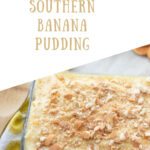 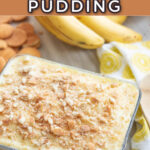 If you grew up in the south then this style of banana pudding is the kind you always remember your mom or grandmother making.


Now you can make it for your family.

Ingredients you will need include…

Begin by mixing your flour, sugar, salt, milk, egg yolks, and vanilla in a saucepan.

Cook on medium until thick, continuing to stir so that it doesn’t stick to your pan.


This will take approximately 15-20 minutes to thicken.

Layer the cookies and banana slices on the bottom of the .


Pour 1/2 of the pudding mixture over the top.

Repeat with the second layering of cookies, bananas, and the second 1/2 of the pudding.

The last step is to crunch up a few additional vanilla wafers and sprinkle them on the top.


You could also top with whipped topping, which we think would be delicious as well.


I certainly don’t think you can go wrong with either topping as the true power player of this recipe is the rich vanilla egg custard.

Yes, you can eat this delicious southern homemade banana pudding straight away if you like it warm, otherwise, refrigerate until you are ready to serve.


This recipe is so easy, truly the only difficult part is waiting for it to chill before eating.

Can banana pudding be made the night before?

Yes, most people actually prefer that it has time to sit in the refrigerator to become chilled, rather than eating straight from cooking.

Since it can be prepared ahead of time, Banana Pudding is a wonderful dessert to serve for picnics, barbecues, and potlucks.

Will bananas turn brown in ?

Yes, they will start to brown after a day or so. This is the reason it is important to get bananas that are ripe but not overripe.

The peel should be yellow with no green , very minimal to no signs of browning.

How Long Does banana pudding last in the fridge?

Banana pudding can be safely stored, and covered in the refrigerator for up to 3 days.

Want to print or save this recipe?

You can eat this dish straight away if you like it warm otherwise refrigerate until you are ready to serve.

Some people like to serve topped with meringue or whipped topping. You can do as you desire.

What do you do if the pudding doesn't thicken?

The pudding will thicken, it typically takes about 15-20 minutes but depending on your stove could take longer.

We made this for a work party and it was delicious! Thank you for sharing! Followed up the recipe exactly

This recipe I tried for the first time tonight. It was easy to make and tasted like the pudding I grew up eating. Definitely will make again.

You can use either, just depends on how thick you want your layers to be. I personally think it works best in something smaller than 9x13. I believe the one I use is 7x11 or something along those lines. It's bigger than a square but not a big casserole size.

It was delicious. I added whole eggs instead of just the yolks and also added about a tablespoon of butter to help with the sticking.